In the projects where steel is predominant, Cimolai is a reference point at a world-wide level. From the idea to its realisation, we are offered technologies of the highest levels. In particular, the production to be underlined is the long lasting partnership between Cimolai and Ficep.

The powerful steel structure of the Johannesburg stadium, did not escape to the attention of the people who this summer, followed with trepidation the Football World Cup. A made in Italy masterpiece, that unlike our football team, was able to impress the international audience. The master of these productions was Cimolai Spa, a historic company from Pordenone, known throughout the world for its metal constructions. In its activeness, Cimolai has put forward projects like the

Olympic Stadium of Athens; the bridge of Reggio Emilia projected by the architect Calatrava, the viaduct Chavanon and many more civil and industrial buildings, bridges, viaducts and stadiums. On top of all this there is also the production of welded beams for off-shore and naval industries, inox steel corrugated floodgates for tanker ships, cylindrical and polygonal poles for electrical and telecommunication lines, tubes with bigger thickness and diameter, hulls for ships. In other words, where we find a big steel structure we find Cimolai. Everything began in 1948, when Armando Cimolai opened his first laboratory of metal gates and fixtures. From then on the work has been plenty, and today Cimolai produces in four different establishments: two in the region of Pordenone, one in San Giorgio di Nogaro (UD) and one in Venezuela located in Puerto Ordaz.

Design, quality and speed
Cimolai’s strength is in the first hand designs it produces; thanks to an internal staff of 90 engineers. Adding to the design there is also the quality in the production and assemblage and the capacity to always respect the delivery times, even in the most critical cases.

In the committed productions where steel is predominant, Cimolai acts as a general company, dealing in first person with the design and production of the work and subcontracting for the other parts that they don’t directly deal with, for example the parts in concrete and the use of the systems. Also the assembling phase is of main importance, with accurate studies from the company to find the most adequate solutions. A lot of important projects, for example the viaduct in Chavanon, were realised thanks to the assembly solutions that were proposed. Cimolai is in fact able to provide the assembling design, with the various positions of the elements, of the cranes, etc. The assemblage, even when it is subcontracted to third parties; it is always supervised and followed on sight by the technical director. In the productions of such projects like stadiums, buildings, bridges, even the timing represents a crucial element, requiring an attentive coordination of the resources and the managing of all the critical factors. “In projects like the Olympic Stadium of Athens or the Johannesburg Stadium, the factor of timing was absolutely crucial – Andrea Zanetti explains – which required the coordination of all the internal functions to reach the objective, meanwhile managing the priorities and the continuous variations related to the construction. The implementation is also very important : we have just closed off the 800 meter steel ring of the new Varsavia stadium, a 12 meter ring composed of 72 elements with a geometry that is variable in between spaces, all linked together by bolted flanges and with no possible way of compensating them with fillings. An intervention which required absolute precision, from the fact that from the 60 meters pre-assembled elements, the tolerance of the positioning in the altitude was only 2 mm.”

Efficient Organisation
Similar results can only be obtained if you have previous experiences with extremely efficient and smooth organisation. The company is structured as a matrix, with service functions like the purchasing department, technical department, the production department, financial and human resources area. Within these functions, the technical directors insist with a project management of the project. Therefore the directors coordinate all the functions aiming to the result, setting times and requirements, but leaving the work autonomy inside every single function. The heart of the company is the technical department, divided in two big areas. On one side you can find the project area, which is based in Padova which is linked to the University. On the other side you can find the designing area that produces the constructive drawings for the workshop of all the single pieces and so, once again, we start from zero, and so every project becomes unique. Therefore, the technical department creates the drawings and the calculation reports are transferred to the CNC of the machines for the production phase. And hence, the realisation of the project follows the usual steps: the material first gets cut and drilled; the next step is the assemblage and welding of the single elements, and subsequently the superficial treatments and shipment onto sight. Despite the strong automation during the pre-working phase, the real structural steel section remains related to craft and the human approach is decisive. “In this sector, the ability and intelligence of the carpenter still plays a fundamental role – Zanetti explains – in the physical production of the piece we are still craftsmen, even though we are working on 200 ton pieces. We are obviously structured at an industrial level, but in such phases like the assemblage and welding they remain craft work.”

Cimolai-Ficep: winning team
The partnership between Ficep and Cimolai is a long and lasting one. For more than thirty years the Ficep machines “feel at home” in the company’s establishment: from the first drilling machine introduced at the beginning of the ‘80’s, until the most recent models that combine both drilling and cutting operations. During the years Ficep has treasured the suggestions provided by the mastery of Cimolai, constantly developing new solutions to find the best outcome for the needs of the workers. Today Cimolai has various Ficep lines, for example CNC drilling and punching lines for plates; drilling and punching line for beams and combined lines for drilling and cutting operations. The drilling and punching plates line can be used on elements until 3 meters in dimension, whereas the drilling-punching beam lines start from an encumbrance in the profile of 1000 mm and ascends to 1200 mm, 2500 mm and 3200 mm. This latter machine, in relation to the workable dimensions, represents the top of FICEPS range.

The combined drilling and cutting lines are also particularly appreciated by Cimolai; representing Ficep A 25 and A 31 (the company has 3 of them). Such machines, especially used on bulky and geometrically complex elements have the advantage of combining the drilling from the sheet to the subsequent cut of the same. In this way, after the cut of the sheet, you can avoid to replace again the piece for the drilling operation. “For us it is a considerable advantage – states Zanetti – especially in the case of the heavy elements, which otherwise, after they have been cut by the torch or panel, they should have been taken and delivered to the drilling machine with repositioning that could influence the quality of the processing. To first drill the sheet and then cut it, is clearly a commodity, as well as saving time.”
The line A 31 also includes the characteristics of having two transfer carts (in contrast with the previous machine A 25, which only has one), which enables to maintain its’ positioning with precision.
“On the machine A 25, the sheet slides on the rolls driven by a single cart and a single pincher, the sheet needs to already be of a certain quality – Zanetti continues – on the other hand on the machine A 31, the two carts enable a maximum precision of the positioning for the sheets of any dimension, format and quality. At the beginning we were afraid that during the cutting process, it being thermal which means it can deform the material, there could be some decays in its quality. However by trying out the machine and looking at the results, we have no more doubts, and the positioning is always precise.”

Simplicity and flexibility
One further element that was signalled by the Cimolai technicians, is the simplicity in using the Ficep machines and their flexibility, represented by the wide range of workable elements, being it dimension or weight. The possibility of being able to work even with heavy and big elements, in fact represents a fundamental atout for the steel construction department, where there is a continuous increase in the dimension and weight of the elements. The dimension of the bays are in constant increase, as is the performance of the bridge crane, and the tendency, is in fact that of increasing the dimensions of the single elements.
“The Ficep machines are strong and efficient machines, specific for steel construction – Zanetti concludes – in this sector reliability and simplicity are fundamental, as well as the facility of using the program. They are machines that do not require accuracy, however they have to always work and never give any trouble.” Even the easy maintenance and the immediate availability of the components play an important role. The directors of Cimolai are in fact capable of carrying out individually, each single maintenance intervention and replace each single component. In the rare cases where assistance is required, Ficep has however proven to be always ready and available. The software section is also easy to use; the technical department forwards the files to the CNC which then processes the information. There have also never been any problems with the integration with other software and machines endowed by the company.

The new Shoreham factory is one of the most modern in the world, designed to automatically transfer material direct from the dock side through each of the desired FICEP CNC processes.

Depending on the customer’s requirements, the material can be sent for a combination of shotblasting and painting, cutting to length, drilling, countersinking, tapping, milling or scribing, notching or coping and then be loaded onto transport in a pre-planned delivery sequence with minimum amount of personnel incredibly quickly and totally automatically.

The total capacity to produce up to 100,000 tons of steel per year from the Shoreham site and is capable of operating 24 hours a day, 7 days a week.. 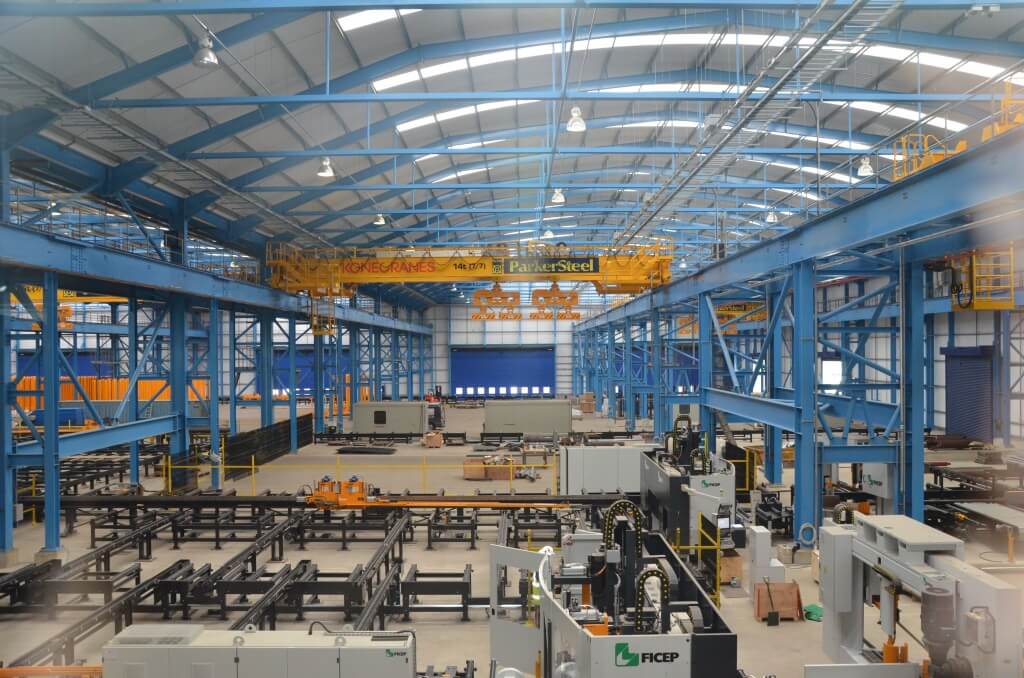 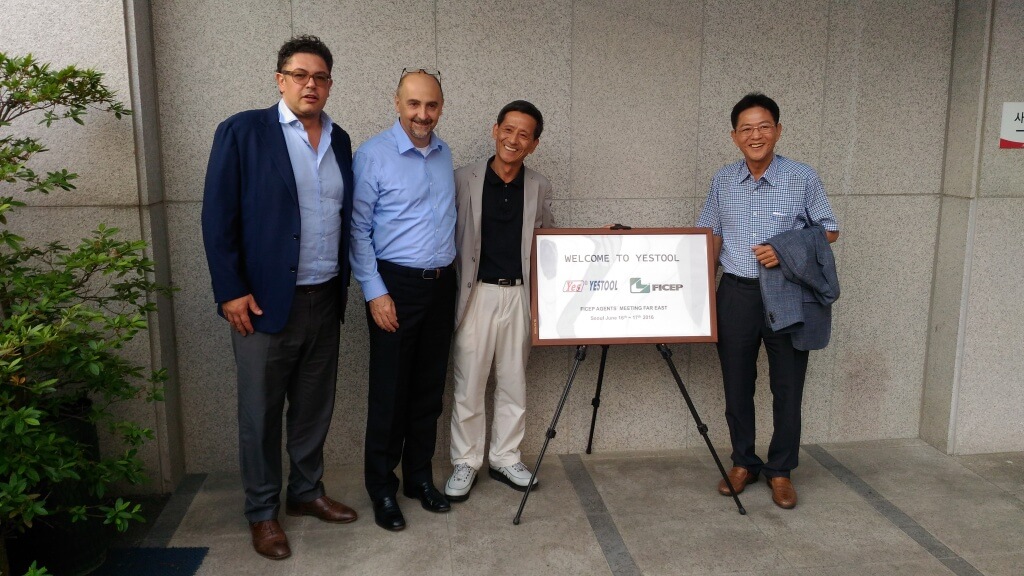